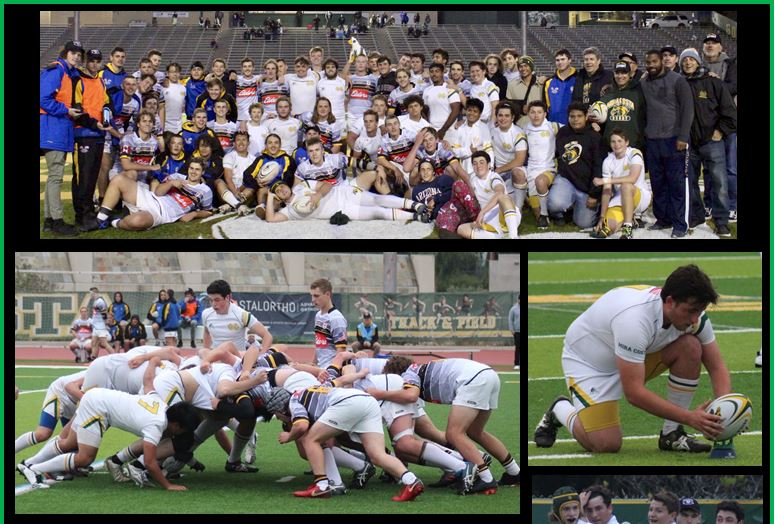 The Mira Costa Ruggers finished up their International portion of their 2019 season by taking on an All Star side from New South Wales, Australia.  The Cockatoos showed up already having badly beaten two very good Canadian teams and were looking for more success in the South Bay as they took on the Mustangs.

The Aussies struck early as they found the Try Zone only 2:58 into the match for a 7-0 lead.  However, 6 minutes later Tomy Unduragga hit a penalty kick from 42 meters to make it 7-3. The Aussies continued to press their attack and with 23:21 left in the half they again found the Try Zone. However the Mustangs Unduragga again hit a penaly kick to make it 12-6. Nev­ertheless trading penalty kicks for Trys was not going to bear much fruit for Costa even though Unduragga hit another, this time from 12 meters. NSW again was able to break the defense for a score making it 26-9. The Costa boys finally broke through as their Forwards used their effec­tive “pick and go” offense to move the ball deep into Aussie territory where Outside Center Slade Gordon made a timely offload to Unduragga who in turn made a beautiful and unselfish pass to Winger John Darcy for a corner Try. The score right at the half made it 26-14.

However the second half was all Cockatoos as the boys from Down Under used their skills and depth to shut down Costa for a 48-14 final. To give you an indication of the ability of the Aussies, 3 days later they hammered Jesuit High School (Sacramento, CA) who was ranked in the top 10 in the nation.

Post match the boys exchanged gifts and then attended the Mira Costa junior dance where they were hosted by the Costa Girls Rugby team and the school ASB.