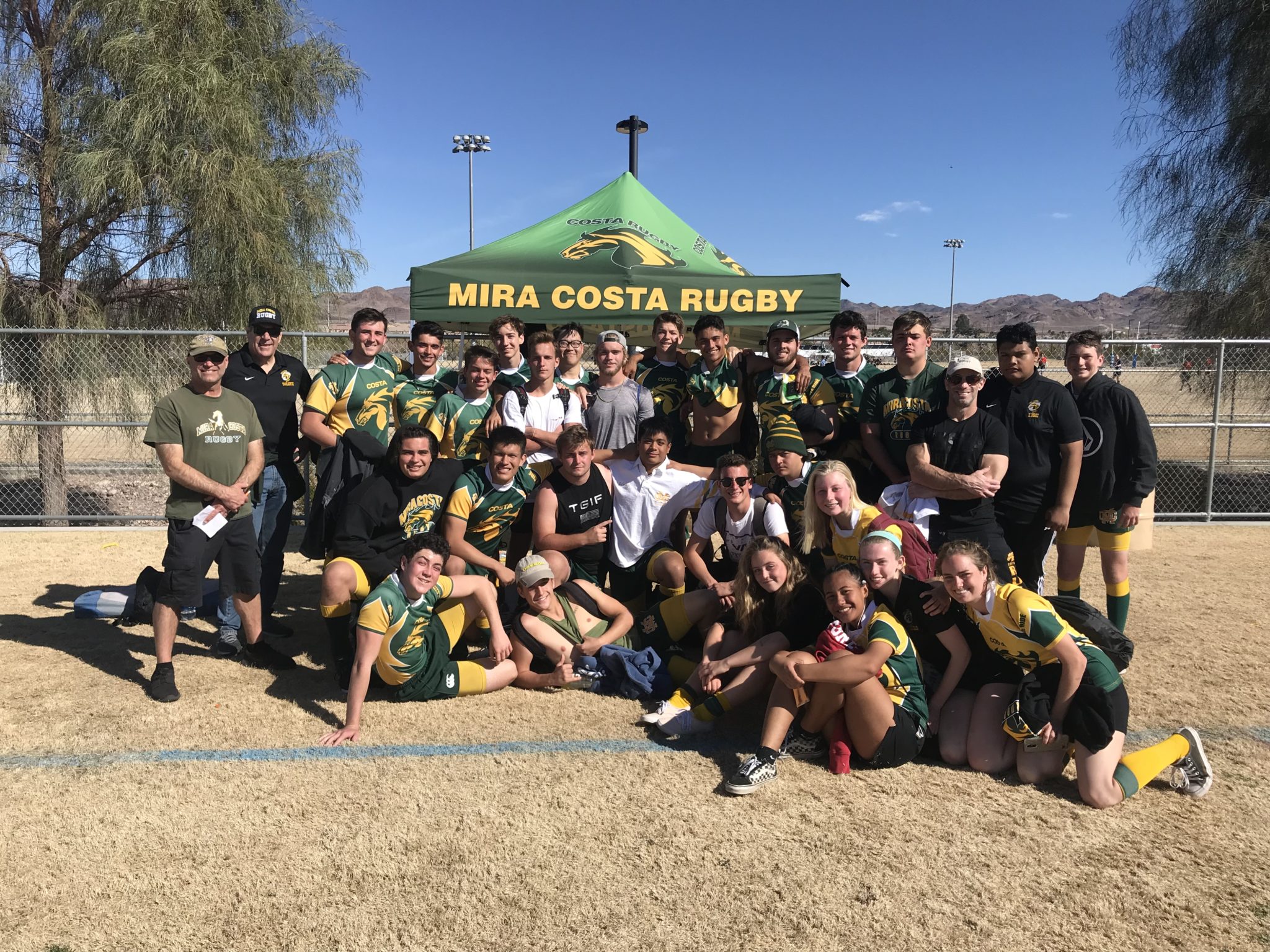 The Mira Costa Rugby team travelled to Las Vegas for the International 7s tournament. The Mustangs took 2 boys teams as well as for the first time a girls side as well.

The Green side opened with Rock Rugby from Austin, TX. Austin Tiradeau & Slade Gor­don scored but unfortunately the defense faltered as Green dropped the first match 10-17. The next match was against the Las Vegas Blackhawks. The Vegas side had no answer for Aiden Martinez as Costa won 21-7. The final match of the day came against the British Columbia Elite. Jordan Corral scored his first ever Try & Evan Anderson scored as well but the Canadi­ans were too much for Costa 10-26.

The Gold side opened play against a strong team in Kahu from San Diego. Sean Cascad­den took a great pass from Ben Wilberding to open the scoring. Christian Hunter had a 42 me­ter score and another from point blank but the San Diego managed to edge Costa 19-21. Match 2 was against Broken Arrow, OK. Sean Cascadden had 2 40 meter Trys while Luke Mohr add­ed another but the Oklahomans managed to tie the match 17 all. The last match of the day was against Shawnigan from British Columbia. Sean and Tomy Undurraga mustered 12 points but it wasn’t enough as the Mustangs fell 12-19.

The Ladies meanwhile had a very difficult day as they played in an extremely competitive and strong pool. Their first match was against East High, Denver, CO. Despite a 28 meter score from Camille Boll the ladies lost 5-28. The next match was against the Foothill Lions of Alberta, Canada. The Lions were spectacular as they hammered our girls 0-64.  The last match was against the Carrol Chargers of Indiana. The girls fought hard but nevertheless dropped the match 10-29.

Despite all three teams struggling on the day they fought hard and had moments of stellar rugby.

The next day will be better!

The Mira Costa Ruggers found more success on the second day of the tournament. The Boys Green side opened play against the British Columbia Elite. Captain Evan Anderson opened the scoring with a nifty 26 meter run & converted the kick for a 7-0 lead. Unfortunately, the boys from Canada managed to put up 2 late scores to defeat Costa 7-14. The last match was against Southeast (United States). The boys gave up an early Try but it was pretty much all Costa after that as Aiden Martinez found the Try Zone, Evan Anderson converted. Then just before half Jordan Corral sprinted 46 meters before making a beautiful offload to Anderson who then found Jaren Cortez. After half Reed Vabrey and Martinez found the Try Zone 28-17.

The Gold side took on our friends, View Park HS of LA. The first half saw the Mustangs trying to play the Knights game and it was a bad decision as they gave up 22 first half points. The second half saw Costa playing their game as they controlled the ball until they could find Tony Cascadden on an overlap which they did twice making the final 10-22. The final match was against Shawnigan Lake HS (Vancouver, Canada) and it was a thriller as they traded scores. It was the Tony Cascadden show as he went weak side off a scrum for a 34 meter score & he converted the Try. Matt Vensel added a Try from 48. Down 12-19 no time left Cascadden got around the Canadian winger for a 68 meter romp. Unfortunately, the conversion failed giv­ing the Mustangs a 17-19 loss for a 1-3-1 overall record.

The Lady ruggers had gone 0-3 the day before but were without their star Ashley Brownsberger. The first match of the day was against the Mt. Boucherie Bears from West Ke­lowna, British Columbia, Canada. The Mustangs crushed the Canadians 45-0 with Browns­berger, Cece Morriss, Alyssa Boras and Camille Boll all scoring. The victory pitted the Ladies against the Summit HS (Colorado) Swarm for the Shield Championship. The ladies gave up a few Trys on defense but once again their offense was unstoppable as they blew out the Swarm as they won the Shield Championship-the first championship of any kind in the girls’ program.