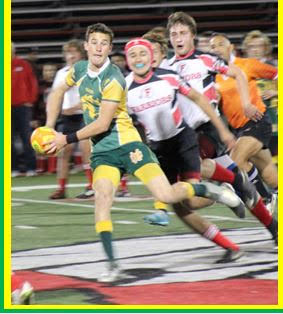 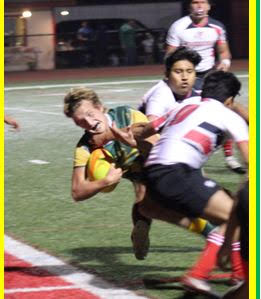 The Mira Costa Rugby team had another long road trip; this time Fallbrook, CA. The Warriors have a long and rich rugby tradition. However, the Mustangs, playing with only 1 reserve used their skills to run the Warriors off the pitch.

The match opened w/ a couple of miscues by the Fallbrook side but Costa failed to capitalize. It wasn’t until 10 minutes into the match when Number 8 Aus­tin Tiradeau scored from 7 meters out off a forward drive. Captain Evan Anderson added the conversion. 4 minutes later the Mustangs scored a beautiful try as Inside Center Reed Vabrey took the ball from 62 meters out at full pace, then hit Prop To­my Undurraga who immediately offloaded to A. Tiradeau who then hit Outside Center Slade Gordon who sprinted the final 42 meters for the Try. Anderson con­verted. 5 minutes later Anderson (the Man of the Match) dummied his opposition & blew 43 meters for the Try and his own conversion. At the 25 minute mark it was the Mustangs rapidly developing Lock Drew Brumley who found pay dirt from 8 meters out. Anderson converted. Brumley has become an excellent jumper on the Costa lineouts. However, a few minutes before half the Warriors took advantage of 4 consecutive offside penalties to get on the board for a 28-5 halftime score.

The second half was more of the same as Costa offense continued to pressure the Warriors. Undurraga opened the 2nd half with a smart 8 meter drive. The con­version failed. Costa kept pressing the issue as they consistently played in the oppo­sition’s end of the pitch. Forward Captain and Hooker Luke Mohr found the Try Zone off another successful Forward drive. Anderson converted a penalty kick to drive the score to 43-12 after a Warrior score. The icing on the cake came on the fi­nal play of the match as Anderson took a penalty on the 6 meter line & kicked the ball across & backwards into the waiting arms of Underagga as he dove in for the final score…50-12. Much of the Mustangs success was a result of Anderson’s foot as he was able to consistently put the Warriors in a hole with his kicking.